In cooperation between the Ministry of Health, the Tunisian Scout and the Association Charles Nicole’s doctors for Medical Development and Innovation , Tunisia will host the Rare Disease Month activities from January 30 to February 28, 2022.
This event generally targets the general public and the general public, and through this it seeks to raise awareness among the responsibles, industry representatives, researchers, health professionals, and anyone with a genuine interest in rare diseases.
This awareness-raising and sensitization process is carried out by organizing scientific symposia, meetings with decision-makers and awareness campaigns in the arenas and major commercial spaces and through the media and social media. The campaign was launched, Sunday, January 30, 2022, with a scientific symposium hosted by a number of experts and doctors in the City of Science in Tunisia.
This activity represented a valuable opportunity for constructive dialogue and discussion among the participants, according to the importance of the topic, and in the presence of a group of doctors and researchers, a number of patients and parents, as well as young scouts 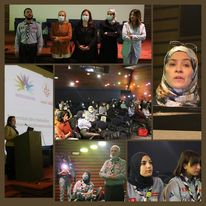