Meet Mathieu, who features in the Rare Disease Day 2017 video alongside his mother, Stéphanie. Mathieu, who is 10 years old, lives with congenital myasthenic syndrome, a group of genetic disorders that impair neuromuscular transmission, characterised by fatigable muscle weakness. From a young age, Mathieu’s parents noticed that Mathieu had muscular difficulties. He couldn’t even push on the pedals of a bike.

Following a consultation with a paediatrician, Mathieu was told that he should see a neurologist in Paris. Confronted by long waiting lists, Stephanie’s mother decided to contact AFM-Téléthon who helped her to organise a consultation with Dr Barnerias within a month.

Mathieu had an EMG at the age of four and a half, the result of which was a diagnosis of congenital myasthenic syndrome in November 2012.

At the end of October 2014, a muscular biopsy was planned in order to confirm the diagnosis, since Mathieu was showing conflicting symptoms, ones that would perhaps suggest a different pathology. “It’s crucial that we clarify Mathieu’s diagnosis, not only so we 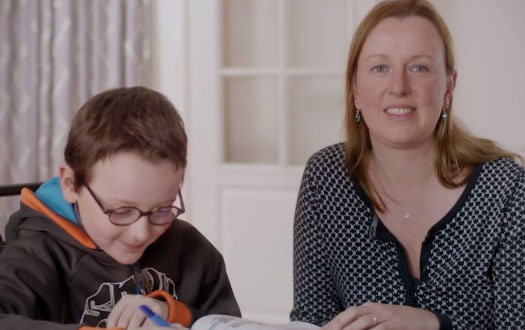 can provide the appropriate treatment, but more importantly for his future. The possibility of a treatment is something that excites me, there’s a lot of hope for Mathieu and other children like him” explains Stephanie. “At first I didn’t fully understand my son’s disease, but I soon became hyperactive, it’s important to live life to the full, to enjoy life, we never know what tomorrow will bring.”