Geoffray and his sister (who is 8 years older than he is) have suffered from poor sight since birth, without a precise diagnosis. Geoffray had to wait until the age of 13, in 1996, before meeting Dr Hamel at Montpellier hospital, who would go on to perform genetic tests on several members of his family. It was during this period that Geoffray and his sister were diagnosed with retinitis pigmentosa.

Up until his end of school exams at the age of 16, Geoffray sustained an eyesight that allowed him to read and to keep up with his schoolwork at an ordinary school, albeit with some additional equipment. In order to continue his studies, he moved on to braille. He continued his education at a specialist centre in Villejuif where he studied to become a software developer and graduated with his degree in April 2005.

Geoffray describes his vision as like a tunnel; it is very centred, as if he is seeing through the hole of a straw. His disease is progressive, meaning that his vision worsens little by little. In the day, his vision varies according to light and brightness. At night he only sees lights and colours.

After obtaining another technology degree in technical marketing in 2008, Geoffray was asked a lot about work and his relations with others in the workplace. “I wouldn’t like to find myself behind a telephone meeting clients, I want to be able to meet them in person.”

Geoffray has a young daughter named Lucie. During the pregnancy, exams were carried out that determined that the child wasn’t going to be born with the same disease as Geoffray. 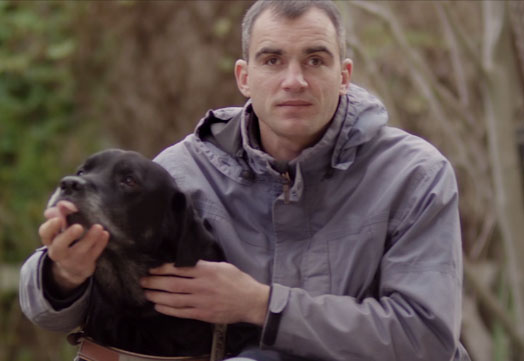 Life with his daughter Lucie has bought him plenty of joy. Lucie very quickly learnt to understand her parents, both of whom are visually deficient. “When she was being baby-sat, she took our hands and put them underneath her arms to tell us that she wanted us to take her with us, or she made different noises according to what she wanted to eat or drink!” Lucie helps her father a lot on a daily basis, both at home and outside. Recently, she explained to a friend that she didn’t have a little brother or sister because her parents can’t see!

In the last few years, the disease has continued to evolve and Geoffray’s sight has even further decreased. He can now hardly distinguish between light and dark. Geoffray is very interested by advances in research on his illness.